Alterior - No Reason To Be Ashamed [chase028] 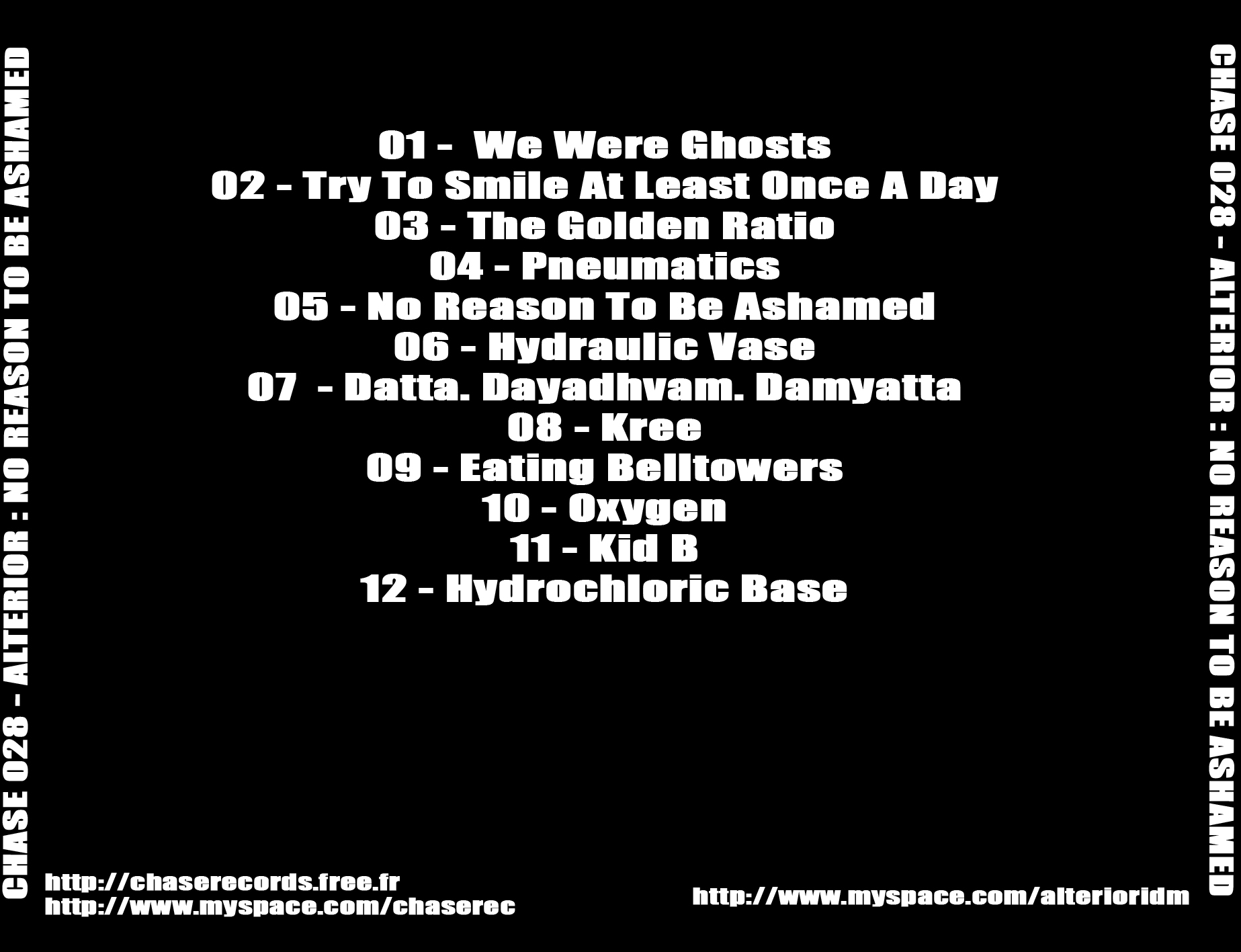 Alterior - No Reason To Be Ashamed [chase028]

Concept of release:
Alterior - No Reason to be Ashamed was conceived in interest of more radical juxtapositions of musical elements, such as between frenetic, violent, percussively active drums and melodious singing and synths. Inspired by experimental works in the "IDM" and Breakcore genres, the pieces features erratic drums that often operate as the central "voice", akin to a melody or a melodic solo in other music. However, the music also betrays to high levels other aesthetic preferences and influences: the melodiousness and interesting harmony of Super Nintendo-era Role-playing Game music, the lyricalness of Classical Choral music, the rhetoric and desire for larger-scale meaning and "story-telling" of Instrumental Classical music, and the jagged rhythms, chord extensions, and "improvisational" quality of Jazz.

The music is additionally ornamented on selected tracks by baritone and counter-tenor vocals; while the baritone vocals lends itself to singing with words, the counter-tenor vocals, partially inspired by Sigur Ros as well as singing traditions with large amounts of singing on wordless syllables such as Georgian singing, features no words. The singing varies its syllables in favor of another musical element of the vocals, giving the space for the listener to focus more on the musical elements of the voice rather than seeing voice as a carrier for words. This type of singing is also political in nature; it's reflective of the experimental music in the album as a whole, which favours moving away from the straight-jacket of the intro-verse-chorus-verse-chorus-instrumental solo-chorus-outro and variations structure of rock, instead looking for other forms and musical rhetoric to create music that is intrinsically different and explores new expressions of deeper meaning in music. The rejection of lyrics for vocals weakens the total dominance of vocals, trying to entice listeners to listen to all of the elements of the music, rather than just the lead melody or voice; the line between accompaniment and melody as passive versus active elements are slightly blurred, as both come closer to each other in their activity, and also interact and compliment each other more in their active elements. The "instrumentalization" of the vocals helps encourage listeners to think and listen to the music pieces more holistically rather than by a single focus on the melody dominating all other musical elements into a submissive and very repetitive accompaniment, a central common aspect among the tracks in this release. The experimentalism wasn't done just to explore new sounds, but to specifically emancipate less commonly used musical elements so that greater, more specific and dynamic musical expression could be achieved.

The album itself is ordered to chronicle a existential journey through experimentalism; as the album progresses and circles through different comparatively "worldly" emotions, eventually hitting an avant-garde peak in "Kree" and "Eating Belltowers" after the descending darkness and paranoia in "Datta. Dayadhvam. Damyata", that also has esoteric connotations. In the latter half of "Kree", after a conglomeration of organized chaotic elements (pitch-imperfect glitch melodies representing an abstraction of still-existing musical rhetoric and structure), emerges a ode to experimentalism and the need for it, before the music teleports ominously towards the violently avant-garde "Eating Belltowers". Belltowers is in a sense a self-referencing critique of the avant-garde, as in it, although a sense of musical arc and story-telling exists, finally rhythm, an experimented but strong element of order in "Kree", is dissolved along with tonality, with violent, "unpleasant" sounds wailing anger outwards to the listener. "Oxygen" and "Kid B" picks up from the after-remains of the violent avant-garde to try to pave musical meaning and purpose out of more ordered and semi-tonal elements, akin to an existential crisis. The album finally hits a meditation ground of its musical elements through the primarily optimistic, rhythmically violent "Hydrochloric Base" that space-ily arranges the musical elements in the other tracks in the other tracks in one, a kind of musical "answer" for the "question" that was posed in the beginning tracks of the album. Interestingly, "Hydrochloric Base" is also the first track on this album that was written, and was in a sense an initial blueprint for the musical ideas that would surface out of it, like a crystal that reflects multiple aspects of itself, the potential colours of light it refracts, possessing and generating those elements to create other visually appealing material.

9 - No Reason To Be Ashamed

This release is a short version of the complete "No Reason To Be Ashamed" Album.

Complete version can be purchased at :